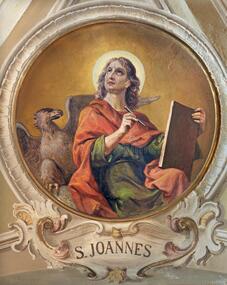 Saint John, our Church's Patron Saint
Saint John the Evangelist, also known as Saint John the Apostle or John the Son of Zebedee, was one of the twelve Apostles hand picked by Jesus, his brother, James the Great, was also an Apostle and together they were known as "Sons of Thunder". He is well known for writing the Book in the New Testament that bears his name as well as being the caregiver for the Virgin Mary after Jesus was crucified. He is the only disciple of Jesus who died of natural causes (the others being martyred for their faith). His Feast Day is celebrated on the 27th of December (the third day of Christmastide). He is depicted commonly with an eagle, which Christian theologians say it means that Christians should look on eternity without flinching as they journey toward their goal of union with God.

In the early 19th Century, immigrants from Ireland moved in large numbers to Middletown. By 1830 there were enough families there to form a vibrant and close-knit Irish community that desired its own place of worship. In 1841, two acres of land were purchased on the current site of the Church. Most of the future parishioners of St. Johns worked across the river in the brownstone quarries of Portland and the owners of the quarries donated large blocks of brownstone to help build the first church.

Since Saint John was built back in 1843, and the Diocese of Norwich was not created until August 06, 1953, by His Holiness Pope Venerable Pius XII, the Church is the oldest Church in the Diocese (as it actually pre-dated it) and is known as the Oldest Church of the Diocese. The Archdiocese of Hartford, in fact, had ecclesiastical jurisdiction of the Church until 1953. The imposing Irish influenced ecclesiastical Gothic Revival church building was designed by architect, Patrick Charles Keely and it was built by local Irish immigrants that were led by prominent local builder Barzialli Sage.

​The original church that was completed in 1843 was just a small church building and the existing spire for the Church was erected in 1864. There has been three renovations to the exterior of the building. The 1864 building is now the sacristy for St. John and the current church was finished in 1852. The Church can hold up to one thousand worshipers. The interior walls of the Church were frescoed by William Borgett, a local artist and there have been several interior renovations over the years. The building is listed as significant contributing property of the City of Middletown Historic District.

In 2017, the Parishes of SS John & Sebastian were yoked together with Rev. James Thaikoottathil, J.C.D. becoming the first Pastor of the yoked parishes.
​
The Church celebrated their 175th Anniversary of serving the Catholic faithful of Middletown on September 30, 2018. Where His Excellency, Bishop Michael Richard Cote, D.D., Bishop of Norwich re-dedicated the Church.